I tend to be a hoarder when it comes to certain things. Whether it be baseball-related items, skateboards, records or books; I have a hard time getting rid of stuff that means a lot to me. When I was putting together this site, I thought it would be fun to include a section of Padres related items I’ve accumulated over the years and share them with those of you who also love San Diego baseball. Many of these items are from my childhood and some are fairly new. Either way, I’ll include a short description with each image and some background info on it.

This page will forever be a work in progress.

This Jerry Coleman Day patch was a giveaway on September 15, 2012 at Petco Park when the San Diego Padres hosted the Colorado Rockies. I missed the game, due to living in San Francisco, so I had to track this down on eBay. I now wear it on my backpack. 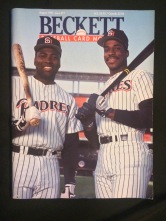 In 1991, both Tony Gwynn and Fred McGriff were featured on the cover of Beckett Baseball Card Monthly. Needless to say, I had to get my hands on it. 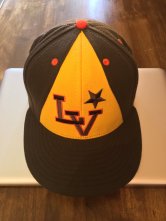 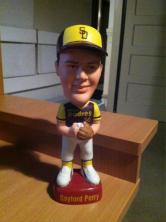 I love vinyl and when I found out that there were not one, but two records out there commemorating the 1984 Padres season, I knew I had to get my hands on them. Jerry Coleman narrates the record on the left, so you know it’s good. 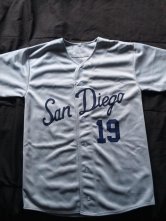 I found this 1965 PCL Padres jersey for sale on eBay by someone who makes jerseys. Even though I’m not a fan of the blue and how similar it is to the modern Padres uniform, I still decided to pick it up, due to how cheap it was. It also helped that he was willing to add any number on it I wanted, so I obviously went with the #19. I’ll probably wear at a pickup game at some point or another.

When I was a kid, I found this article on Tony Gwynn and his bat size in an article of Sporting News. It ended up being on my wall for years as well.

About 10 years ago, I decided I wanted to start playing baseball again. I knew that the old glove that I had at the time wasn’t going to cut it, so I started looking around online for a new one. I found a brand new unused Tony Gwynn Rawlings glove on eBay and knew that it had to be mine. It fit perfectly and I still wear it when I’m not playing first base or catching.

One of the “abandoned” Chris Denorfia Padres bobbleheads from 2014.

The first Bring Back The Brown glasses that San Diego based company, Knockaround did. They sent out a cool Padres related related package to those who ordered it. Unfortunately, I got a Jack Clark card with mine. 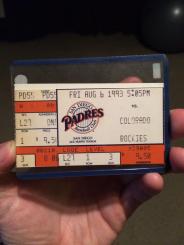 In 1993, Tony Gwynn got hit number #2000 during a doubleheader against the Rockies. I was there and it’s still one of my fondest memories of my childhood.

Another item I had on my wall for years during my childhood was this 1991 article about Tony Gwynn and his feud with both Jack Clark and Mike Pagliarulo. Like many Padres fans, I despised Jack Clark after this and was happy to see him go.

When I was a kid my walls were covered with images of professional athletes, and many of those images were of Tony Gwynn. This Fleer baseball card advertisement from 1992, featuring Mr. Padre himself was on my wall for years. For some reason, as I got older and my walls slowly became covered images of musicians and skateboarders, my Tony Gwynn stuff didn’t get thrown away, but packed away. I’m glad I made this decision. 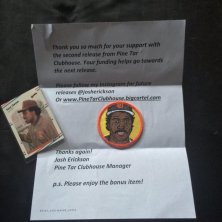 In 1993, Tony Gwynn signed a large extension and this article was included in the newspaper of the city I lived in, located in Northern California. As a kid, I thought it was incredibly cool that my hero was being making news in places outside of San Diego, so I cut it out and saved it. Somehow I still have it, over two decades later. 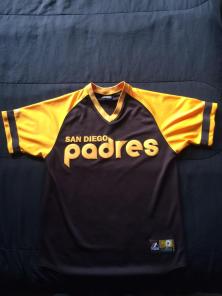 While searching around for Padres related hashtags on Instagram, I found a vintage sports clothing store that had this 1978 Padres jersey by Majestic for only $35. I couldn’t turn it down. 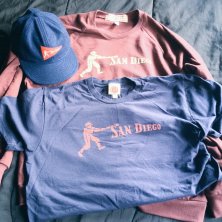 According to Ebbets Field Flannels, their Red Ball Collection was “Inspired by the mini-pennants given away with Red Ball gum in the mid-1930s. Historically-accurate artwork combines with American-made vintage apparel.” Due to my fascination with the PCL Padres and how much I love Ebbets and their products, I absolutely had to get my hands on this Padres cap, sweatshirt and t-shirt.