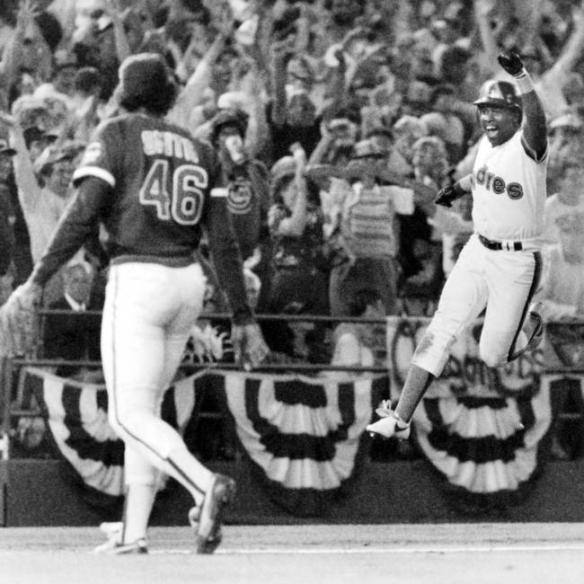 In what is one of the greatest moments in San Diego sports history, Steve Garvey hit a two run walk-off home run against Cubs closer Lee Smith in Game Four of the 1984 NLCS. I recently came across this photo of Tony Gwynn ecstatically rounding third base while Smith exits the field. Needless to say, I was delighted as I had never seen it before. Image Source: Chicago Tribune
.

The 1978 All-Star Game was held at Jack Murphy Stadium and both Rollie Fingers and Dave Winfield represented the Friars. During Winfield’s time in the big leagues, his foundation ran the “Winfield Pavilion Program,” where’d he provide tickets to young baseball fans. During the 1978 Midsummer Classic, he ran into a bit of a speedbump in regards to this:

In 1978, Dave planned to bring 500 kids to the All-Star Game in San Diego. In a radio interview the day before, he inadvertently invited “all the kids of San Diego” to attend. Over 10,000 showed up — and Winfield brought them all into batting practice. It was the first open All-Star batting practice.

This has to be a logistical nightmare for Winfield and the Padres to deal with, but still, it’s a very cool story. Text Source: Winfield Foundation
.

Cito Gaston of the Padres slides into home during a spring training game against the Brewers. Based on the yellow uniform that Gaston is wearing and that Ellie Rodriguez is catching for Milwaukee, this photo had to be taken in 1972 or 1973. Image Source: Getty Images